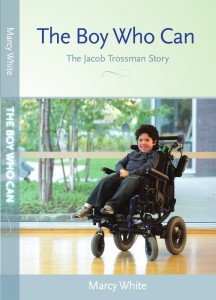 When Jacob Trossman was born with Pelizaeus-Merzbacher disease (PMD), a rare and incurable neurodegenerative disease, his prognosis was grim. The doctors warned his parents that he would never speak, sit or eat independently. The medical professionals were not optimistic that Jacob would have the ability to learn or to understand what was going on around him. Part survival manual, part love story between parent and child, The Boy Who Can is a chronicle of a mother’s refusal to accept the limitations placed on her son. Marcy White recounts the seemingly overwhelming struggles and joyous rewards of parenting Jacob who engages everyone he meets with his infectious smile and sparkling green eyes.